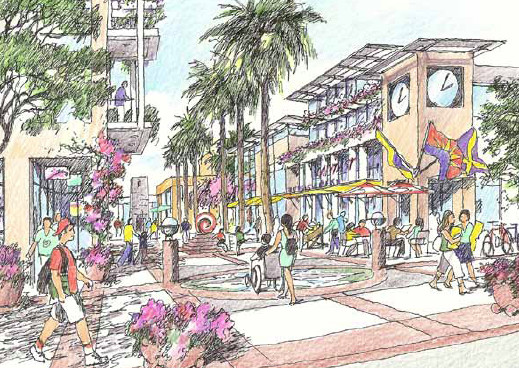 Planners have good cause to feel unloved these days, especially when it comes to infill development. In communities as geographically and politically diverse as Orange County and San Francisco, citizens are using the ballot box and other political tactics to overturn infill-oriented plans. In Santa Monica, the City Council acceded to residents’ demands and gutted the City’s five-year old Land Use and Circulation Element that had received a national award from APA in 2012. And while Berkeley voters overwhelmingly rejected a measure to dump the high-density transit-oriented Downtown Plan, opponents of infill pack public meetings and attack proposed projects from every conceivable angle.

In a recent address to the AICP College of Fellows, Gail Goldberg, former Planning Director for Los Angeles and San Diego, reflected that with increasing interest in smart growth,, “things were starting to look like fun….Everyone we knew thought they were a planner and, for a short time, ‘Everybody loves us, baby!’…[but as smart growth plans began to be implemented,] “hundreds of people are showing up at public meetings, invited by advocates who had decided that [planners] were devils ruining their way of life. More density, more traffic, more parking issues, not enough infrastructure, taxes are going up, everything is getting worse and it’s all our fault. ‘Nobody loves us, baby!’”

What’s gone wrong and, more importantly, what’s a planner to do? One AICP exam offered this option to another knotty question: “Quit your job and leave town.” Here are a few less drastic possibilities that can help planners and planning agencies to cope.

Planning requires the skills and expertise of professional planners but the process of making planning decisions is ultimately political. Being sensitive to the political environment means understanding the back story. This does not mean a planner should make the recommendation that the decision maker wants to hear, if it is not consistent with adopted policies or standards based on the facts of the matter. It may, however, mean that the planner should be warning officials about anticipated controversy. And don’t hitch your wagon to the commission chair or mayor unless you’re prepared to look for another job when your champion loses an election or moves on to higher office.

Show Me the Benefits

Since the demise of redevelopment, local governments have devised alternative approaches to ensuring that communities derive benefits from new development. In contrast to requiring compliance with standards and mitigation of impacts, benefits should provide amenities that go beyond basic requirements. Although development agreements have become the approach of choice in some municipalities, they are a massive drain on Staff resources. Moreover, the community often views DAs with suspicion – a product of back room deals. Make sure to examine the economic effects of proposed community benefits requirements on development feasibility to ensure that projects remain viable while delivering realizable benefits. Do allow the community to participate in the process of identifying and ranking benefits and then incorporate both incentives and benefits in the zoning regulations. Be aware, however, that a workable approach may mean scaling back permissible development intensity and then restoring it in exchange for providing benefits.

Not Everyone Rides a Bicycle

Even when good transit is available, it doesn’t work for everybody (e.g. parents who have to drop kids off at day care before work and shuttle them to soccer practice after school) and bicycles can’t serve those who work miles from home. Transit might also not be an option for those who work late hours or very early hours in jobs such as those in the burgeoning service and health care sectors. And, while more people living downtown supports downtown retail, businesses also need patrons who don’t live within walking distance. Parking management strategies can play a vital role in making better use of available parking and preventing spill-over parking impacts, where they are a concern.

Some People Prefer the Suburbs

Planners who preach the benefits of a denser life style may need to accept the fact that it’s not for everyone. Many Americans continue to prefer life in more bucolic settings. Consequently, preaching density can be ineffective. Do illustrate options for density and character, but be honest about the implications. All too often there is a disconnect between policies and implementation that doesn’t come to light until the municipality is presented with a real project that differs significantly from the concepts presented in the plan development process and the public’s understanding of the “planning vision”. Municipalities and their consultants need to devise effective ways to present – and test -- different project alternatives during the plan development process and to address reasonable community concerns. Focus on providing information to those who may have concerns but are willing to work with you. If, at the end of the day, some still disagree, don’t feel that you’ve lost, because there are always some whom you will never please.

Recognize that tall and taller buildings can cast shadows, block views, and interfere with the privacy of surrounding neighbors. Municipalities need to employ techniques such as solar analysis, photo simulations and, where necessary, wind tunnel analysis to evaluate these potential effects and devise standards that require new development to be designed to minimize the adverse impacts of taller buildings on existing development. Examples include setbacks at the upper floors, building separation standards, and siting buildings to minimize shadowing

Lower income households often get displaced as infill development makes places more attractive, especially without traditional redevelopment programs and in light of statutory restrictions on rent control and rental conversions. Housing element policies that “promote” housing choices “to meet the needs of all economic groups” won’t do the job in a hot real estate market. Making it possible for lower income households to remain in economically strong communities may well require financial assistance from housing trust funds seeded with local tax dollars. Inclusionary housing programs, now legitimized (at least temporarily) by the State Supreme Court may help. Linkage fees applicable to all new development—both residential and non-residential—can augment these funds. And, the best way to ensure that affordable housing remains that way is to nurture and support the experienced non-profit housing developers that are responsible for many of the State’s new affordable units. While increasing the supply of all housing is vital for promoting affordability regionally, at the local level trickle down just doesn’t work.