The future of our cities, towns and urban places is challenged by the availability of adequate infrastructure and its costs, particularly when it comes to infill development. Simply said, it is often easier to develop on greenfield’s where infrastructure is new and can be installed unencumbered, sized appropriately, and financed along with the development. Meanwhile local jurisdictions struggle to implement infill to develop sustainably and maximize the efficiencies of their existing communities and utilities.

What is Infill Infrastructure?

Infill development is challenged by available infrastructure, including utilities (water/sewer, energy), transportation options, and public amenities such as parks. Infill target areas are typically older neighborhoods in transition to a new intensity of development. The existing sewer, water and roadway networks were designed decades ago often for much lower density and different uses and are not easily upgraded to serve newer more dense development. Most infill developments are in areas with a long legacy of deferred public infrastructure maintenance and a public perspective that a fix to this problem is owed to them.

In addition to challenges associated with upgrading utilities, communities often have nowhere to add much needed parks and other amenities to serve the increased population. The size and density of infill development can make it difficult to provide sufficient on-site recreation amenities, and must rely on shared open spaces in the larger community.

This pressure on already-taxed local constituents for infrastructure, recreation and amenities often is the basis for community opposition to increased development. “Where will the children play?” go to school?” is often asked.

First, an infill development policy such as an updated General Plan or area plan must be informed by the current state of the infrastructure. How old is it? What is its capacity? What opportunities exist to provide amenities along with the infill development available to the current population? This upfront approach allows cities to plan for infill and perhaps show how new development can help a community catch up with existing deferred investments in infrastructure and public amenities.

Once informed by the current state of things, a platform for future infill development must include implementation actions to ensure adequate infrastructure is provided. This will ensure the development adds value and capacity to a community. What does the community need/want? Can an infill strategy develop the mechanism to deliver those amenities as part of the infill development? A plan that doesn’t address these issues may express a community’s desire for infill but does only half of the job of planning for infill. Planning can also build community consensus in support of infill as it promises a better community with updated infrastructure, enhanced community amenities, and reinvestment.

In Ventura, the City’s 2005 General Plan was guided by an “infill first” strategy and included a map of desired infill areas to target this development. Unfortunately, these targeted infill areas did not include utility ground-truthing to ensure adequate water/sewer was available or would be available at the time of General Plan implementation.

As Ventura planned the redevelopment of its Westside community, density was anticipated to increase. This increased development was met with opposition because of a perception that the area was already underserved for active park space and the new development would not deliver additional parkland (perhaps only small pocket parks within the development or enhancements to existing park spaces). 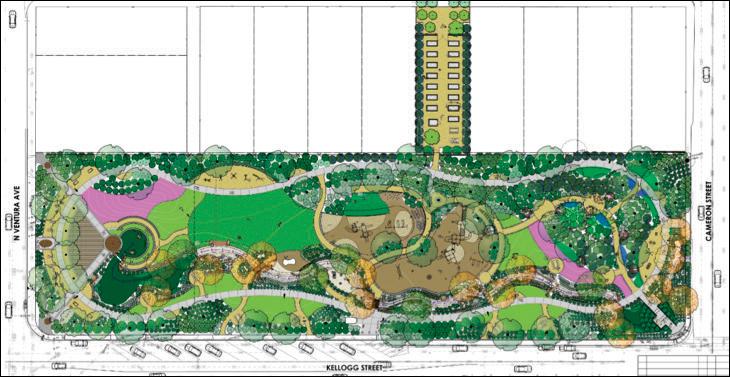 When the City agreed to purchase a 2.5 acre site for the new Kellog Park, the community’s concern about new development was significantly reduced as the City addressed existing concerns that opened the community up for new infill development. The City of Ventura has a robust park facilities fee program on new development. This development by code will provide community park amenities to offset the increased demand generated by infill residential projects. The California Housing Related Parks Program (HRPP) is perhaps the most direct funding link between infill affordable housing development and park space amenities. Over the past three years, the City of Ventura has received over $1 million in park funds through the HRPP program as a direct result of approving affordable housing development. These funds are being used to improve an existing community park and to fund the development of a new neighborhood park in the very community housing is being constructed.

If the cost of necessary upgrades is placed on each development as they come, an infill project may need to extend infrastructure upgrades far beyond their project boundary making the financial feasibility of these projects difficult if not impossible. When the first infill development seems overburdened by the need to address inadequate infrastructure, some combination of impact fees, reimbursement agreements and Enhanced Infrastructure Financing Districts (EIFDs) should be in place to ensure these developments can proceed without such an overburden.

Corner of Leighton and Ventura Avenue

A proactive strategy to deliver infrastructure and community benefits is an important accompaniment to policies that encourage infill development, as a vital way to address community needs.